Are Mortgage Interest Rates Going up or down in 2020?

For the larger part, interest rate forecasts are simply educated guesses, which means that analysts may change their opinions depending on several factors, including the strength of economic growth. For instance, when economists are uncertain about the direction the economy is going, then they may predict flat rates. 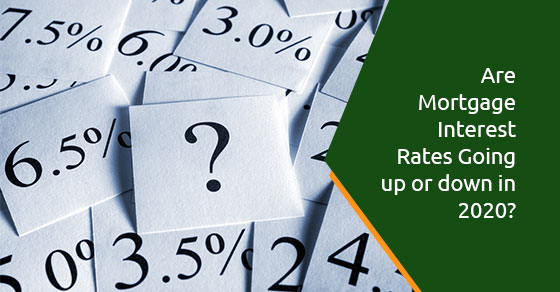 The Bank of Canada (BOC) tends to raise the Bank Rate (the rate at which banks borrow from the BOC) when the economy is responding positively, and lower them in times of recession as a way to stimulate the economy. While economists were expecting rates to stay flat until mid-2020, their predictions have changed; they are now expecting the rates to drop owing to an economic slowdown.

In the first quarter of 2019, the Bank of Canada (BOC) predictions for 2020 were somewhat optimistic with expected growth of 1.2% for the rest of 2019, and then an increase to 2.1% in 2020. This was attributed to lower oil prices, as well as global trade uncertainty, lower consumer spending and housing activity, and tariffs. At the same time, the Bank Rate has remained the same at 1.75% since October 2018, despite Europe and the United States looking to cut their rates due to the weakened economic activity.

Many economists have a contrary opinion to the BOC, and actually, anticipate slower activity going into 2020 because of:

2. Softening in the U.S. economy

Despite Canadaâs low growth in recent years, the country enjoyed a strong tailwind from the robust U.S. economy, though this, too, is expected to slow down because of the stagnant interest rate.

With the shrinking Canadian economy, reduced development growth, and a housing slowdown in Western Canada, there will be less business for mortgage brokers and banks, realtors, home inspectors and appraisers, and property lawyers, as well as a delayed condo development and fewer job opportunities for the construction sector.

The Bank Rate is below the normal range, and the Bank of Canada hopes to increase it gradually to reach the inflation target, provided the country can avoid a recession. That said, with the stagnant interest rate, economists predict that an interest rate drop is a more likely outcome as opposed to a rate increase.

The mortgage interest rates are connected to the Bank Rate. In the short-run, economists agree that nothing will change. But in the long-term, some economists predict that the Canadian prime rates used to calculate adjustable and variable mortgage rates will drop or stay flat between now and 2021. Keep in mind that dropping rates are the bond-market response to an expected recession, where investors convert some of their riskier investments to gold and government bonds.

If youâre concerned about rates rising, then you should consider getting a fixed-rate mortgage. Otherwise, variable rates are ideal when rates are flat or falling. The latest forecasts show that variable rates may fall in the coming couple of years, which may result in more savings on interest costs for borrowers. But for personalized advice, please consult your mortgage broker.

For more information on mortgage rates in Canada, call Northwood Mortgages at 866-307-0747 or contact us here.