If you want to buy a typically sized condominium in Toronto, you need to have at least $100,000 in annual income. A year ago at this time, you only needed to make $77,000 annually. Where has this change come from, and what does it mean for the market at large? 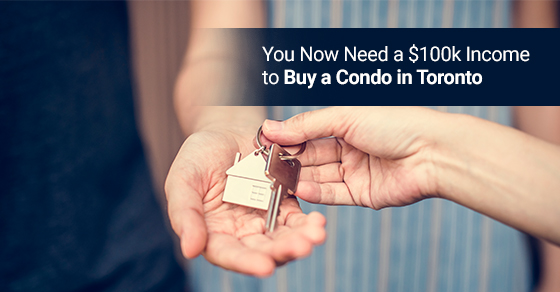 These are the quick facts:

If growth continues at this rate, it might be impossible for the middle or lower classes to own a home in Toronto. Home ownership will become a privilege reserved exclusively for the very wealthy. If homeowners only needed $77,000 to own a home last year, and now they need $100,000, how much higher will the amount be by next year?

The difference between this year and last year is stunning but more shocking is this: Two years ago, the income necessary was only $64,000.

There were new regulations introduced this year which affected the minimum income for approval. These rules require that a potential home buyer can qualify for a mortgage at a higher interest rate than whatever rate is currently being offered. If the new regulations hadn’t gone into effect, the report states that the qualifying income for an average condominium would have been $86,000.

While that income is still a lot, it tracks more cohesively with the previous annual figures of $77,000 and $64,000. From looking at those numbers alone, growth has actually slowed in the 2017-2018 annual period, albeit not by a huge amount. Still, slower growth is a far different picture than the explosive twenty-odd percent growth inherent in the originally adjusted numbers.

There’s more and more evidence that numerous potential home buyers have been forced out of the industry due to increasing home prices. Re/Max is a realty company which recently released a study showing that one out of three potential home buyers has given up the dream of owning a home, almost always because of the new federal regulations or the rapidly increasing prices.

That’s 33% of the potential market. But the statistics get stickier from there: Four out of ten respondents said that they’ve scaled back their ambitions to buy a home by looking for cheaper real estate or postponing their home buying decision. That’s another 40% of the market.

This means that a whopping 77% of the market for potential homeowners has been affected negatively by the new federal guidelines and rate inflation. It’s had a marked impact on the overall housing market and real estate industry. The Toronto Real Estate Board released a report stating that overall condominium sales across the region have dropped by 32.7% in March, in comparison to one year ago. That said, overall housing prices are up 6.1% last year.

Experts say that homebuyers should expect some form of relief as the years continue; they believe that the current rapid pace of growth isn’t sustainable.

More than 60,000 condos are currently being constructed, while another 40,000 have been pre-sold and just need to be constructed. With the increased supply of houses on the market, experts hope that the prices will deflate enough to provide some measure of relief to potential homeowners.

There are a few different factors having an impact on the rental rates of condos in the city:

Economically speaking, it’s a great time to own and lease property in the community. The average monthly rent for a condo climbed 10.7% from last year. An averagely sized 740-square-foot condo costs about $2,206 per month.

The owners of condominiums are taking advantage of the increased number of renters in the area. When large numbers of people are competing for rent, owners can pick and choose those with the most lucrative incomes. They can also raise the rents on their condos due to the fluctuation in supply and demand. Since rates of mortgages are relatively low due to an uncertain economy, condo owners find themselves taking in more rent money than they need to make ends meet. They’re pretty much the only ones economically benefiting from the current state of affairs.

Experts presume that renters will also see a certain amount of relief in the next few years, but it will come at slower rates. At the end of 2017’s fourth quarter, there were almost $8,000 new rental units under construction. An increase in rentable space should allow the rates to lower again.

To learn more about how Northwood Mortgage can help you get approved or advise you on your current mortgage, give us a call at 888-492-3690 or contact us here.